The ultimate guide to Havana: what to expect and travel tips.
1066
post-template-default,single,single-post,postid-1066,single-format-standard,bridge-core-2.1.8,ajax_fade,page_not_loaded,,qode_grid_1300,hide_top_bar_on_mobile_header,qode-content-sidebar-responsive,qode-theme-ver-20.5,qode-theme-bridge,disabled_footer_top,wpb-js-composer js-comp-ver-6.1,vc_responsive,elementor-default

02 Feb What to expect in Havana: a mix of happy colorful contradictions

Posted at 19:36h in Experience by Valentina Di Pietro
Share

The colors of Havana

Havana is the most colorful and contradictory city I’ve ever visited. The colors are well-exposed literally everywhere. On the colonial style buildings painted in all the tones of blue, light blue, water green, pink and yellow. On the cars: the old fashioned ones, the 1950s Chevrolets which Cubans care like jewels and made them so unique, thanks to the colors. You will see the pink one like Barbie car, the red one like a cardinal’s hat or the electric blue one, just to be sure to be different. I would say that they are really part of their lifestyle and if you think that Chevrolet is an American brand it’s kind of funny how much Cubans love them! Of course, everybody likes to take a picture with a colorful vintage Chevrolet in Havana…don’t worry you will not miss it. 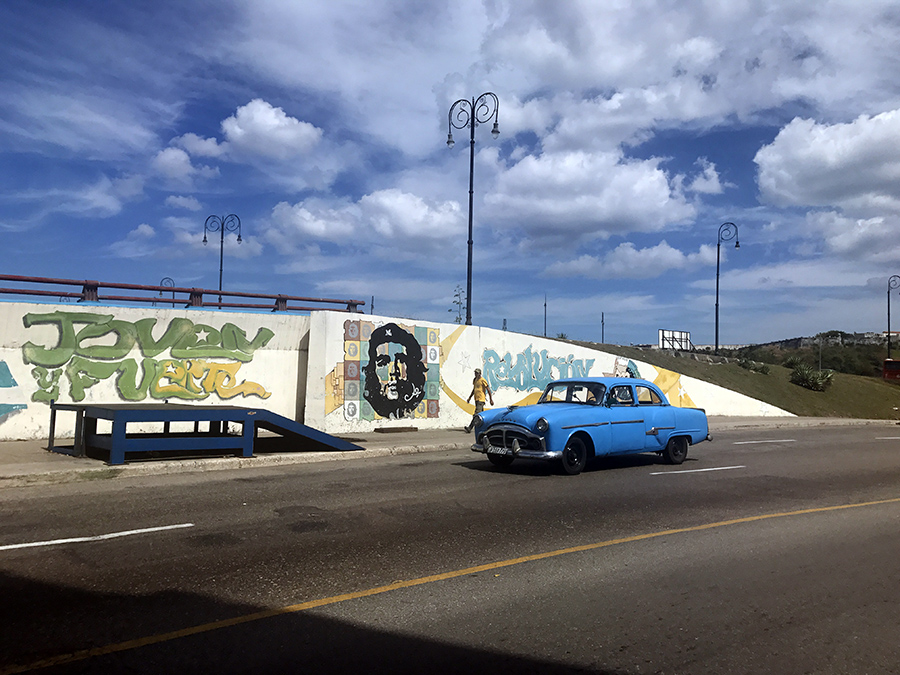 Last, the colors are also on the people: cubans dress always eccentric, colorful, happy like the happiness that they always spread. People are happy in Cuba, every day, in every moment, in every action they are doing. They are happy even if it’s nothing what they will eat for lunch. And extremely slow, in the real sense of Bob Marley’s “take it easy“, maybe because they have nothing to loose. 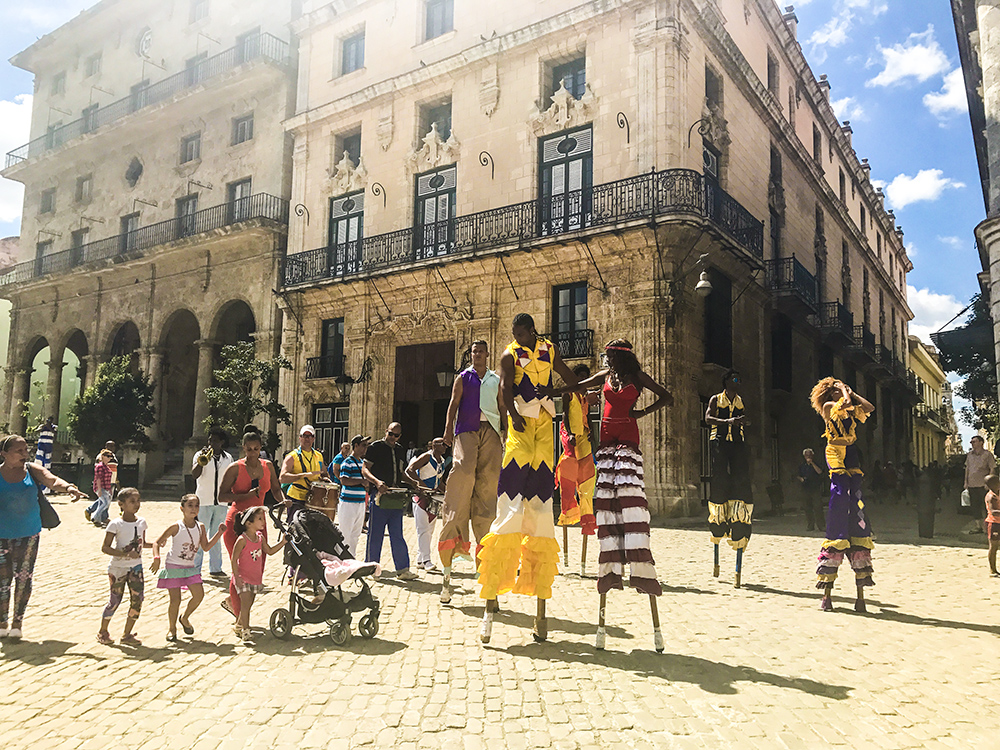 The contradictions of Havana

The other extraordinary thing that I will never forget is the contradiction which I perceived since the first day. I mean that kind of contrast between their believes and their reality, between their laws and their costumes, between their history and their reality. I don’t want to be critical, I just confess what was my first impression which became a certainty at the end of my trip. I spoke with many people in Havana and they are all convinced that their system is THE best system, they are still convinced that politics in Cuba will never change, even if Fidel has died. They will never admit that the world around them has changed since the 1950s so much that is affecting Cuba as well. That happens in thousand little things, looking to me like contradictions of their original political believe.

Just one little example: the use of internet. Yes in Cuba there is internet. Citizens can use it only for a limited amount of time and only depending on how much they can pay for that service. Only very few people have internet at home and, as a result, they are mainly those working with tourism which is a big big business now in Cuba. All the other people (and tourists) need to buy an internet card (ETECSA card, 2 CUC for 60 minutes) that the government releases through the ETECSA company (the only one). Travelers and regular people can use the card in the main hotspot wifi (major squares) or near the hall of big hotels, where they can try to connect to a weak wifi using their mobile phones. How to find those spots? Easy: when you see hundreds of people all in the same place checking their phones, that’s a wifi spot! So if you really really need to check your mail or social profiles, that’s the only way. You can buy cards in few places: ETECSA shops (but the line can be very long!) or an easier alternative (which is just a bit more expensive) is to buy them at the desk of the major hotels (even if you are not staying there). That’s the way I did.

Recently tourism has become more and more influencing in Cuba since it’s a big business. Very few are the jobs which can make money privately: among them, taxi drivers, restaurants and owners of a renting house or B&B/ hostel. It’s very convenient (for both tourists and owners) to stay in a “casa particular“, because it’s cheaper and it’s authentic. I chose to avoid hotels in Havana and to make the experience of a casa, as my wish was to speak with people as much as I could. The casa particular is always managed by ladies who act like house keepers and guests managers (you will never meet the owner, except for few). Some of them are more authentic, some others are more stylish types of B&B, so there’s a variety to choose from. I highly recommend to book in advance, the earliest you can, because the nice ones go easily sold out, even because they have few rooms. My hosts were 2 sweet ladies who provided us with abundant homemade breakfast every morning and welcomed us with a nice free lunch since it was one of the lady’s birthday! I will never forget their generosity. This is the most precious thing I took back home with me. 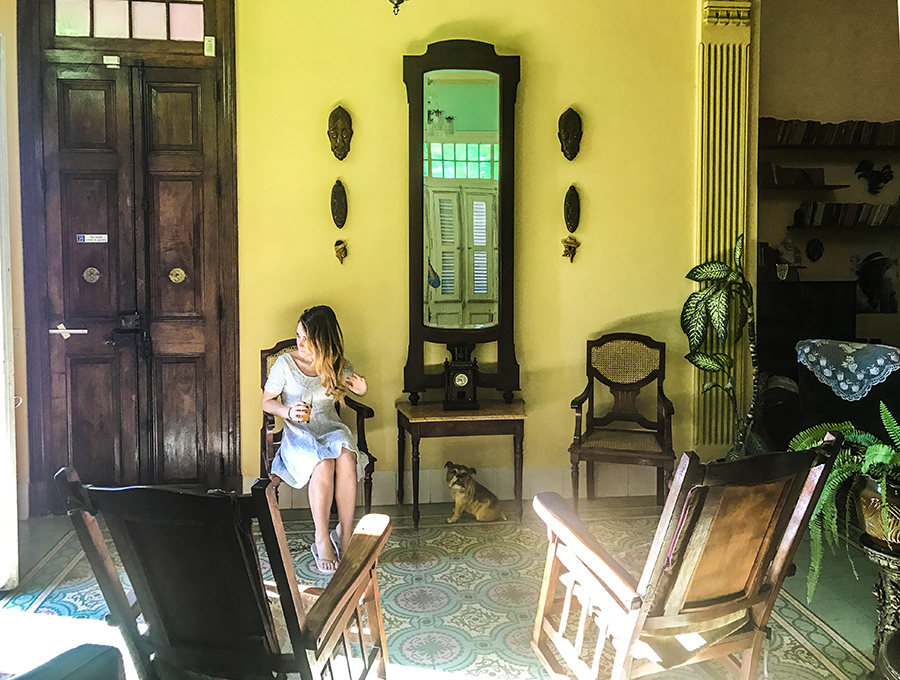 Best location to stay in Havana? I would definitely say the Habana vieja (old Havana) that is the city historic center and the best preserved area since it’s a UNESCO World Heritage Site and it could benefit from it. Apart from that, in my opinion it’s the most fascinating and maybe the safest for tourists. A good alternative is Centro Havana which has a very good location because it’s central and maybe more “real”, since it’s the district where many citizens live and work, so you will see “real” people living their “real” everyday life. It can be shocking somehow, it can be dirty on some streets and a bit dark by night, but you will picture in your mind some images of humanity that you’ll never forget.

I never found Havana dangerous and it’s well known how criminality in Cuba is almost not existent, so don’t worry. Just keep in you mind that they know how much they can gain from you as tourists, so don’t follow anyone to buy cigars or souvenirs or any other service that they offer to you. That’s a very common trick they do with foreigners, trying to engage them that they know the best tabacco vendor at the best price: not true. So if they follow you and they try to engage you, simply say “No Gracias” and go on. 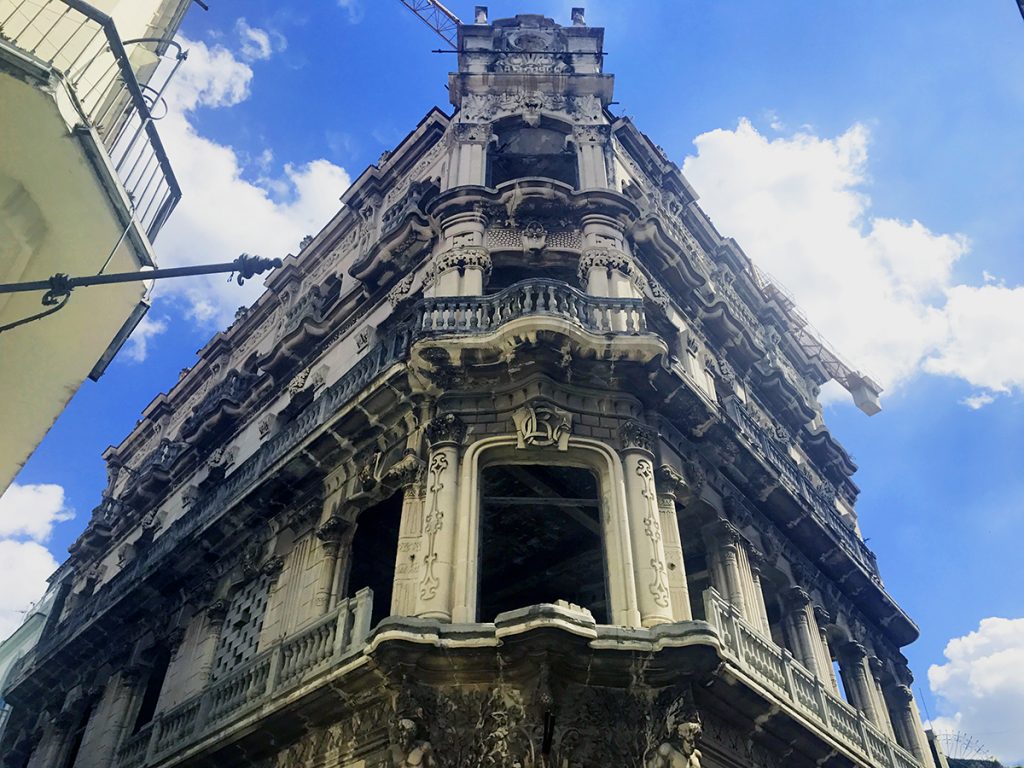 Another contradiction that is evident to me is the state of neglect that you can see all over the old buildings which once were amazingly beautiful: I found that kind of decadence very very interesting and attractive, because it’s a melancholic appearance which is so fascinating for me! The buildings dating back to the early 1900 are so elegant and they tell the story of a wealth which I really didn’t expect. Of course few were the wealthy families and for the majority they were white people (as it is still now). The complicated history of Cuba and the relation with US allowed them to take advantage, sometimes illegally, that’s why the Revolution of the 1950s with Che Guevara and Fidel Castro changed their history. Anyway, that state of decay still evident in the city nowadays is the result of Cuba history and of its economical situation: the beautiful fancy and aristocratic palacios of the early 1900 are crumbling either because they are abandoned either  – and more often- because their owners don’t have money to pay for the maintenance of the buildings where they live. That’s why you will notice that those ruined buildings are still inhabited and you’ll keep asking: how come? Why? I asked them the reason and the reason is simple: the owners cannot pay for restoration, the state neither. So they try to survive the best they can. 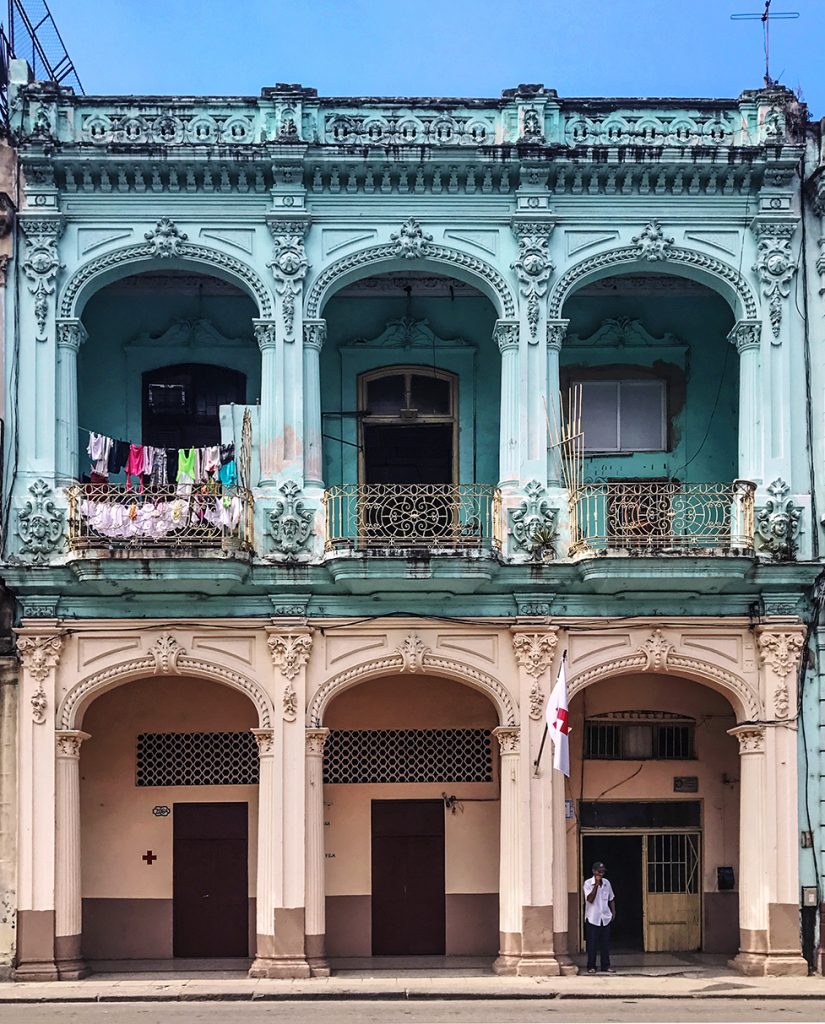 A taxi driver during a ride explained to me the reason of that decay, and he explained even how convenient was for him to become a taxi driver. He decided to become a driver even if he was graduated in mechanical engineering because he could gain much more money with a taxi then having a state regular contract as engineer. Reason why doctors, engineers and layers who in other countries are normally considered to have the wealthiest and even the most prestigious jobs, in Cuba gain less then a restaurant owner or taxi driver. Even if our young taxi driver was admitting how he could take advantage of a new business, he anyway told me how strongly he believed that the situation in Cuba would never change. Why? Because they are too happy with that and still so proud of their Revolution that they will never want to change.

So I left Cuba saying to myself: if they are happy, why should we blame them? But still, I don’t believe that Cuba will not change. Unfortunately it will soon change. I could see how many international companies are entering in Havana with investments, especially in tourism. I saw big projects of restorations going on. I’m so glad I could see what their glorious history gave to them and I loved that feeling of being “back in the history”, which no other country probably has.

In my next post I will give you some tips  😉 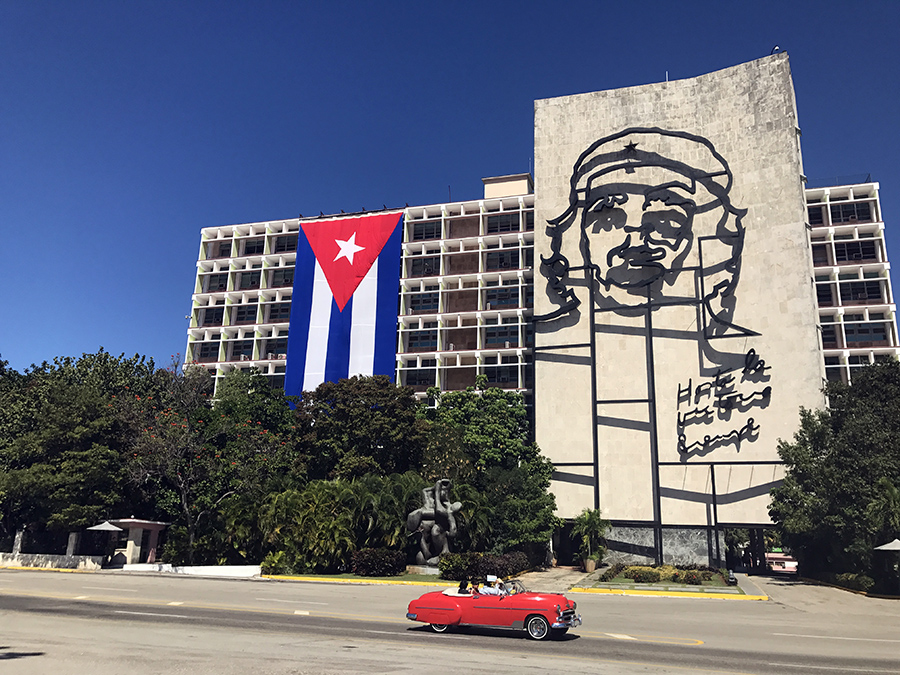