The rape of Proserpina by Bernini at the Borghese gallery
1044
post-template-default,single,single-post,postid-1044,single-format-standard,bridge-core-2.1.8,ajax_fade,page_not_loaded,,qode_grid_1300,hide_top_bar_on_mobile_header,qode-content-sidebar-responsive,qode-theme-ver-20.5,qode-theme-bridge,disabled_footer_top,wpb-js-composer js-comp-ver-6.1,vc_responsive,elementor-default

Posted at 23:48h in Experience by Valentina Di Pietro
Share 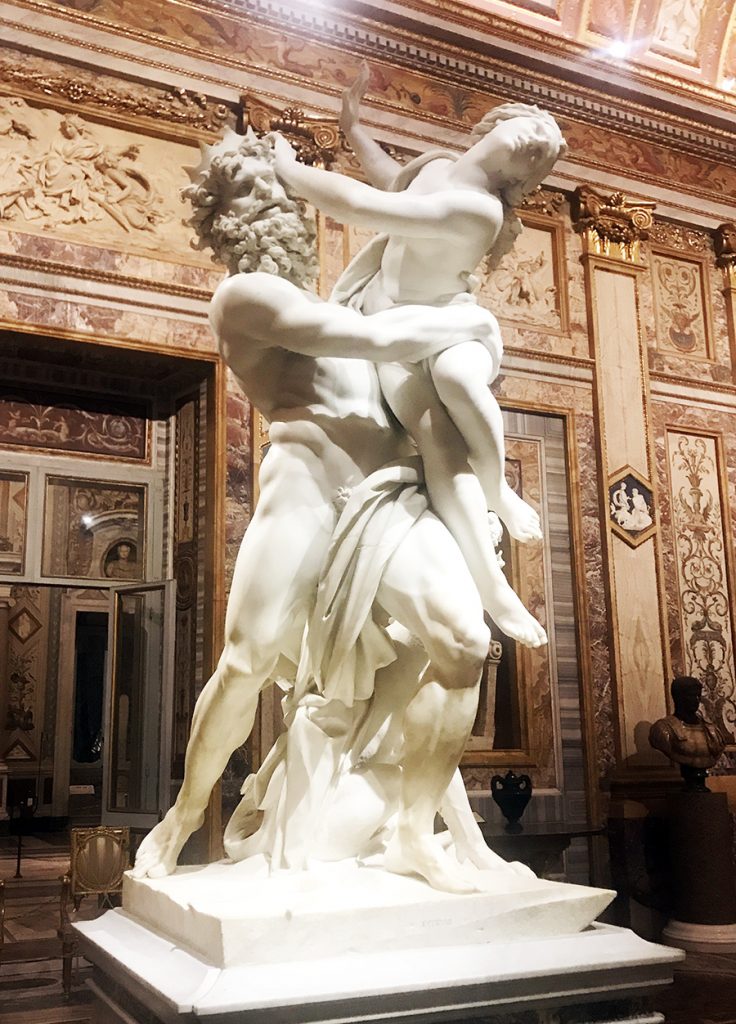 The most famous and glorious statue by Gian Lorenzo Bernini at the Borghese Gallery is a detailed and literal description of the “Rape of Proserpina” a mythological story provided by Ovid in the Metamorphoses. Proserpina (Persephone for the greek mythology) was raped by Pluto, the god of the underworld (Hades for the Greeks), while she was collecting flowers near a lake. Pluto forced her to be his wife against her will. That’s the moment Bernini wants us to live: how hard she is pushing away, how desperate she is! A split second that Bernini captured in full action: her hair is flowing, her dress is spinning, her body is twisting while his body is posing strong, standing almost effortless, so muscular that is almost exaggerated. The contrast between the 2 opposite bodies, one against the other, is Bernini’s choice to symbolize their contrasting attitudes. Every single muscle, every single nerve is sculpted in a such detailed realism that only Bernini could be able to create, thanks to his incredible knowledge of the anatomy of a human body. If you look at Proserpina’s feet or at Pluto’s back, you will realize that. 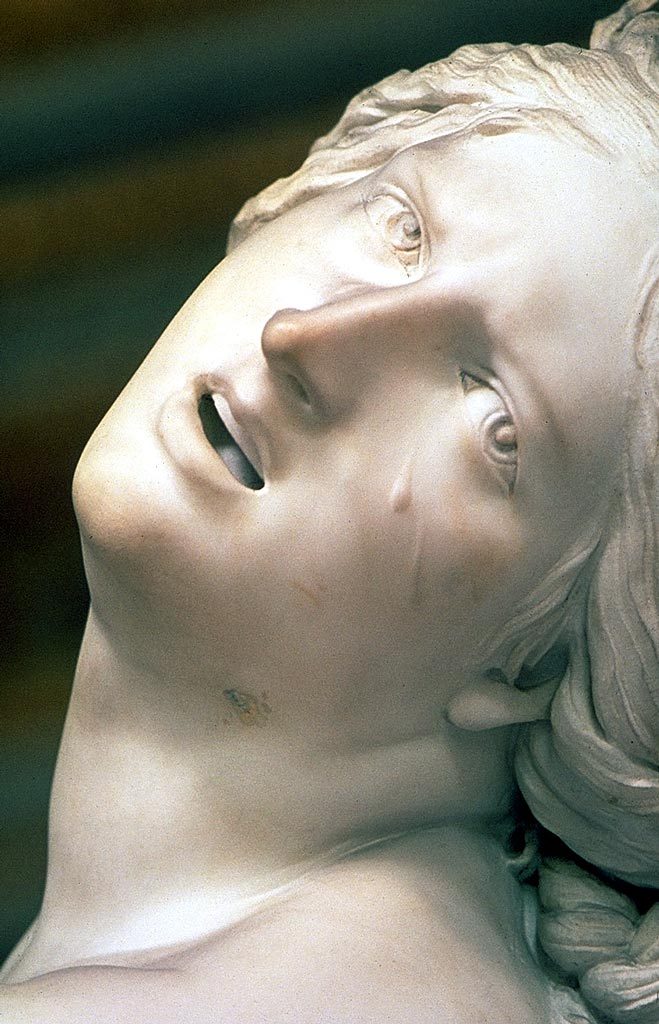 “Inspice me” – Look at me! – Proserpina says to us so terrified. These are the words in latin used by Ovid in his text and also the ones you would have red on the original pedestal, back in those days, when Cardinal Scipione Borghese commissioned the statue. She is clearly inviting us to look at her, through Bernini’s skills, that’s why if you go closer you’ll be attracted by her intense eyes, so human, almost real. That’s one of the main cores of the statue: it has been told several times that the statue was not only a story but also an advice: Cardinal Scipione, patron of Bernini and owner of the villa and of the entire collection, which we still admire today, probably wanted to send a message to his colleague Cardinal Ludovisi as he donated the statue to him. Yes, this celeb statue was not always here, even if the patron was Scipione! Why should Scipione have wanted to donate such a valuable and admired statue? It’s still uncertain. Anyway, they say that the focus on her eyes and the quote was meant to advice his colleague Ludovisi to not believe that serendipity in his life would be eternal (Ludovisi’s oncle was just elected pope), because things can change, politics can change and life can become less pleasant! In other words: what happened to Proserpina can happen to you any moment.

An icone of terror and powerlessness 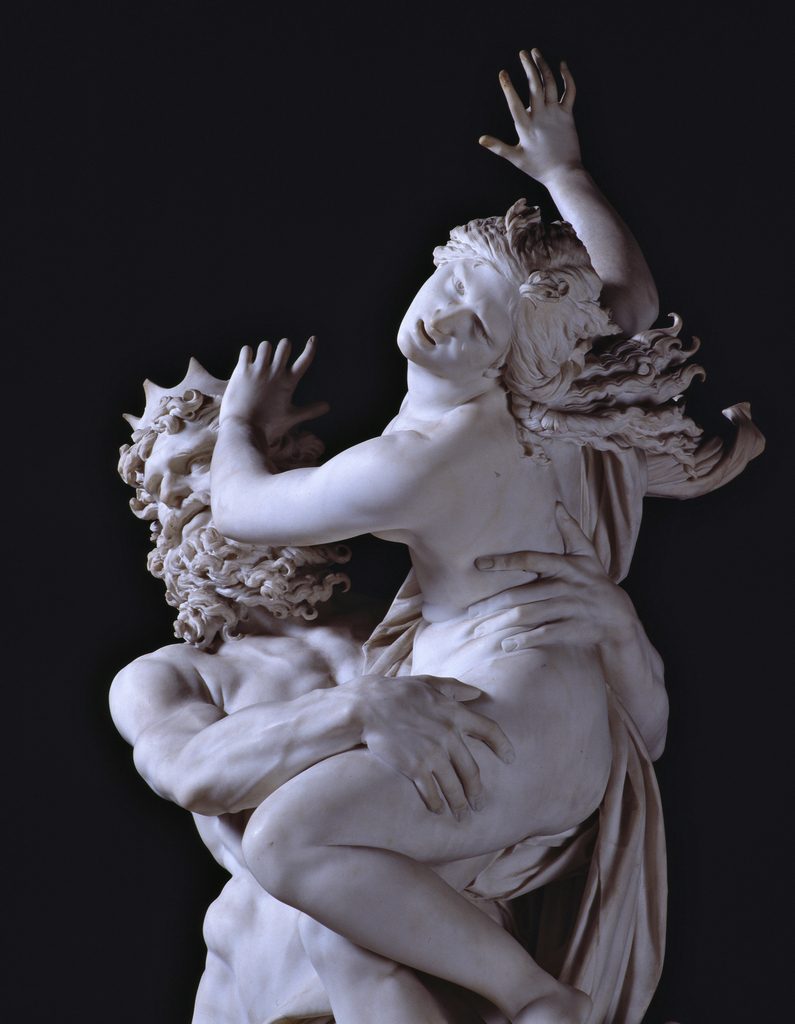 Theatre is part of the story as well as part of the marble. Bernini is the one and only ever been able to represent movement into a piece of marble and to make a story look like theatre on stage. He didn’t only describe a story, he made it happened. When you look at the statue, turning around it, admiring from all the perspectives its incredible details, you are part of the story, living the desperation of her and the resolute glee of him. The tears on her face are the most delicate detail of her pureness. His strong hand grabbing her leg, deep into the soft flesh, is the most admired and beloved detail of the statue, the one that you will see in all the pictures, but no picture will ever move you like when you see the statue in person. It comes so alive that you forget this is stone! You may easily think it’s a real hand touching a woman skin.

The statue is a masterpiece of all the ages, so eternal in its pureness, so modern in its realism. The white Carrara marble is sculpted in only one solid block, an explosion of life and movement, passion and theatre. The face of Proserpina can touch you deeply inside – especially if you are a woman! – the ironic sight of Pluto tells you about men’s self-confidence of all the ages. It doesn’t describe only a myth. It is an eternal episode of our lifes. Our newspapers collect plenty of stories like that. Each of us has a story like that.

If you wish to see the statue with me, please check my private tour at the Borghese Gallery described in Home Page and contact me.